The nights are closing in, good TV has returned to our screens and a slew of autumnal festivities are on the horizon (too early for the C word?). In other words, it’s the perfect time to curl up with this month’s selection of reads.

1. The Worst Date Ever (or How It Took A Comedy Writer to Expose Africa’s Secret War) – Jane Bussmann

I picked this up in Foyles, and I wasn’t initially keen. But I flicked through it, reading random paragraphs, and she was just so funny, so irreverent and so fundamentally honest about what was happening, I had to read it in from start to finish. Bussmann cleverly educates on what is a truly horrific and largely ignored conflict in Uganda, but the book bizarrely masquerades as a Bridget Jones type diary where Jane reluctantly becomes involved in the horrors by complete accident, whilst trying (and failing) to seduce a handsome humanitarian. It’ll get you talking. 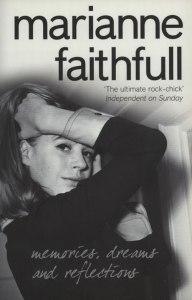 This book sparked a fair few weeks of obsessive googling of Marianne Faithfull’s style, buying numerous shift dresses and the it saw the return of my fringe. But actually this is more than your run-of-the-mill 60s retrospective. It’s a window into a world we only really know about in myth, and Faithfull does a good job of showing you it’s not all Carnaby Street and luxury at the top. That said, any book that starts a chapter with ‘I was with Kate Moss and Cher at Versace’s house…’ is surely worth a read.

There’s something intriguing about the macabre, and for psychological reasons I don’t understand, fundamentally grim books like this one are captivating. The structure is memorable – written as a tortured community looks back and tries to fathom why five teenage sisters killed themselves over the course of one year and the events that ran alongside the quiet degeneration of a once prosperous town. The only frustrating thing is that it’s never really explained and you’re left to draw your own conclusions.

This entry was posted on October 1, 2015 by LGS in And Then Some and tagged book club, Books, jane bussmann, jeffrey eugenides, Marianne Faithfull, october, reading.

Promote your Page too